Jamelle Holieway (born June 25, 1967) is a former American college and professional football player who was an award winning quarterback for the University of Oklahoma. He led the Oklahoma Sooners to a national championship in 1985. 30 years after quarterbacking the Sooners to the National Championship, he remains the only true freshman to achieve that distinction.
Jamelle Holieway is considered one of the greatest option quarterbacks in NCAA Division I-A history. Highly recruited from Banning High School under longtime head coach Chris Ferragamo, Holieway attracted interest from a swarm of schools. Oklahoma, Nebraska, Notre Dame, Colorado, and Oregon and USC came after Holieway. His decision to play for the Sooners came at the last minute, as he had a three-year old sister that he didn’t want to leave behind. At a nearby mall in Carson, a recruiter from the University of Oregon was standing by hoping Holieway had decided not to go to Oklahoma.

At Oklahoma, he took over for an injured Troy Aikman in his freshman year and led the Sooners to an 11-1-0 record under Coach Barry Switzer and the 1986Orange Bowl against the Penn State Nittany Lions for the national championship. Holieway threw a 71-yard touchdown pass in that game to All-American tight end Keith Jackson. Holieway remains the only true freshman quarterback to lead his team to the national title.
Holieway finished his Sooner career with 2,713 yards rushing on 539 attempts (an average of 5.0 yards per carry) and 32 touchdowns. Through the air, he threw 257 times, completing 117 passes for 2,430 yards with 22 touchdowns and 15 interceptions. His passing efficiency rating was 141.5 over 39 collegiate games.
Jamelle Holieway played professionally for the National Football League’s Los Angeles Raiders (1989–1990) and the Canadian Football League’s British Columbia Lions (1991–1992). 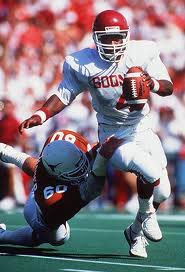 Holieway has raised his family in Oklahoma and is a long-time resident of McAlister. He is still involved with youth sporting activities and continues to support the University of Oklahoma. He graduated from OU with a degree in Communications.
Jamelle is currently a business owner and operates football camps for children across the state of Oklahoma. Jamelle is also available for speaking engagements and autograph signings.